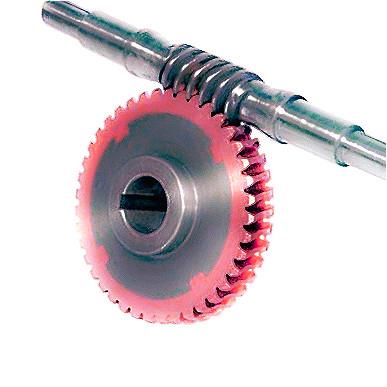 Besides the above explained duplex method, there are various possibilities to adjust the backlash of worm gears:

variation of center distance, by rotating an eccentric hub, in which the worm shaft and/or the worm gear wheel are cradled

axial shifting of a conical worm

division of the worm in two halves , to be rotated or shifted relatively to each other. (system Ott)

division of the wheel in two disks , to be rotated relatively to each other.

However all these methods demonstrate substantial disadvantages:

adjustments and/or readjustments are interfering with the geometrically accurate meshing.

they shift the contact profile zone and change its form and size.

with this they decrease the load-carrying capacity and deteriorate the efficiency.

each adjustment causes a tremendous amount of start-up wear.

the dangers of wrong assembly and destruction of the worm gear set are tremendous.

part of a duplex worm shaft in a rotary table

Duplex gearings do not create these kind of problems.

They permit an always geometrically accurate teeth contact and beyond that, very delicate backlash adjustment. Neither the evolved contact area, the load-carrying capacity nor the actual efficiency are affected. In addition as duplex teeth are executed as involute gear they are insensitive in regards to modifications of the center distance, e.g. caused by worm shaft deflections. 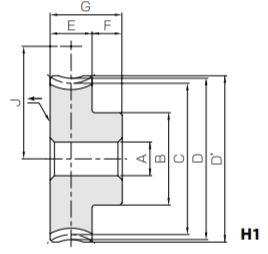 Duplex worms and worm wheels must be mated in a predetermined orientation, which is indicated by the arrows.